ONE MAN, ONE SMALL PRESS AND THE REST IS HISTORY

In 1927, young Cecil Leech started his business, The Leech Letter Co. and ninety years later, his company has evolved into a thriving fourth generation business, Leech Printing Ltd. During the first three decades that Cecil was building his business, Canada went though a series of dramatic changes – the Great Depression, a major world war, then a post war baby boom. Through it all, Cecil remained focused, determined, hard working and innovative – in fact, Cecil probably made Brandon’s first direct mail delivery when he piloted his airplane over the city dropping election flyers. 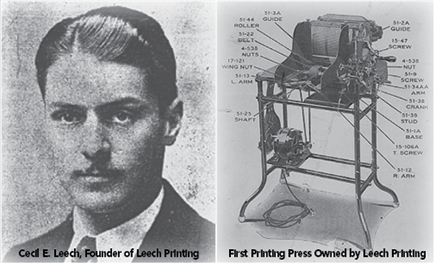 EXPANDING TO MEET THE DEMAND FOR PRINT

Cecil’s sons, Bud and Don, joined him in the business in the early ’50s and Leech Printing began expanding to serve the regional market. In 1955, the business was moved from its 7th Street location to a newly constructed 18th Street premises. There were many technological changes in the printing industry and Leech Printing was at the forefront as it acquired the first offset press in Western Manitoba. The company entered the computer age when IBM computer typesetting equipment was introduced in the ’60s. 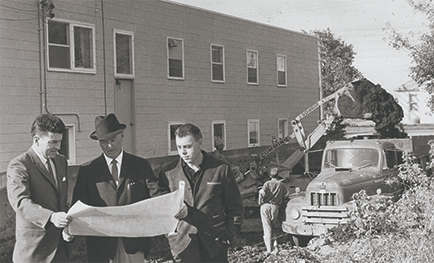 The steady growth continued into the ’70s, with many new additions of staff and major equipment. The ’80s saw the addition of two of Don’s boys into the business. Michael Leech returned to Leech Printing after gaining four years experience working with a top quality colour printer in Winnipeg. David Leech graduated from high school and came to Leech Printing after a year of studies at George Brown College in Toronto. The ’80s also saw Bud retiring to pursue his hobby of carving and to enjoy a warmer climate 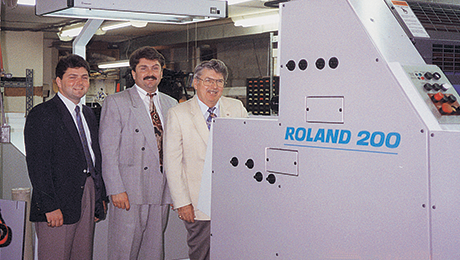 WELCOME TO THE DIGITAL AGE

In the mid-to-late ’80s, the graphic arts industry went through dramatic and significant changes. The digital age had arrived with the introduction of postscript imagesetting equipment (desktop publishing) which created both challenges and opportunities. The decision to invest in digital imaging equipment at a very early stage established Leech Printing as a leader in providing that new service. The company emerged from the decade with a solid footing for the years to come. 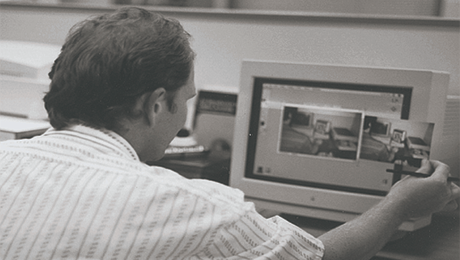 FROM ROLLER RINK TO PRINTING PLANT

In 1992, the company acquired the new 29″ Man Roland four-colour press which allowed them to expand their capabilities and attract new customers throughout Canada and the US. In November, 1996, Leech Printing expanded to its current location at 601 Braecrest Drive. The former Wheelies roller skating rink was converted into a state-of-the-art printing plant, replacing the much smaller facility at the corner of 18th Street and Park Avenue. With over 20,000 square feet of space, the new location now houses the press floor, administrative and sales offices, design and marketing staff, finishing department, and shipping. 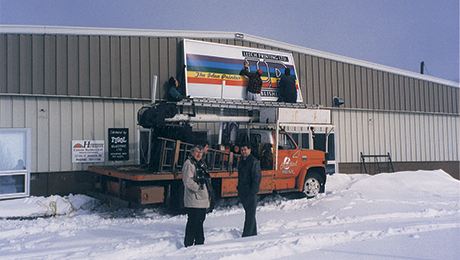 A NEW LIFE FOR THE OLD LOCATION

Following the move to the new location, the site of the old building became home to a new development – Leech Place – with Investors Group as the anchor tenant. Leech Place was also home to the Leech Quik Print, a “Digital Print and Convenience Copy Centre,” which operated out of these premises until 2011. After 15 years, the Quik Print was relocated to the Braecrest location, where all of its original services, and more, are currently available. 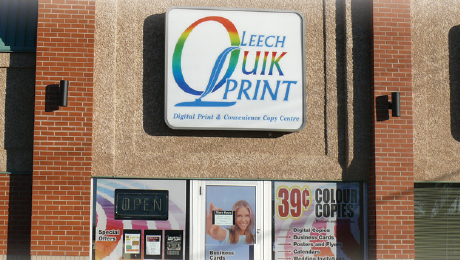 DOING BUSINESS IN THE DIGITAL AGE

In the mid to late 1990s, Leech Printing capitalized on the rise of online communications and digital technologies. In 1998, the acquisition of Innovative Media Group, a local provider of graphic design and website development services, helped transform the company into a full-service graphic design, website design and marketing services provider. Innovative Media Group went through some changes upon acquisition. The department was first renamed to Innovative Media and Marketing and has since developed into what is now known as the Leech Printing Marketing and New Media Department.

PRINTING RAISED TO THE POWER OF TEN

With the move to the new location completed, the company could take advantage of the possibilities the expanded production space offered. The addition of a Heidelberg Speedmaster 10-colour press brought a new level and quality of printing to western Manitoba. Capable of full-colour printing on both sides of a press sheet in one pass, plus the option for a fifth colour, coating or varnish, the Speedmaster became the workhorse of the company and allowed expansion into new markets. 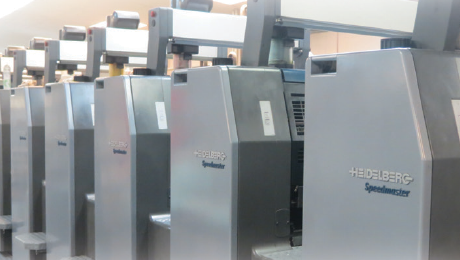 The millennium saw Leech Printing establish a physical presence in two new prairie communities. The company acquired Dowie Quick Print in Yorkton (2004) and Harris Printing in Winnipeg (2010). Currently, the Yorkton market is served from the Brandon office, and the Winnipeg location has since evolved into a satellite sales office with all production done in Brandon. Advancements in technology and subsequently the ease of communication has made it possible to serve these new geographical locations while still maintaining the quality produced at the location in Brandon. 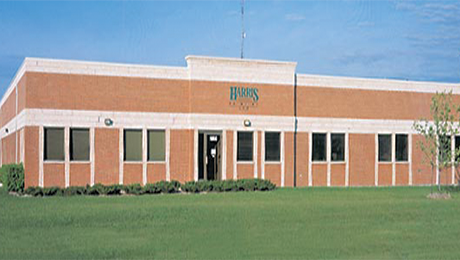 In its 90th year as a company, with the addition of Meredyth Leech in 2014 and Gillian Leech in 2017, Leech Printing is extremely proud to join the ranks of Manitoba businesses that have been family owned and operated for four generations. In 1927, Cecil Leech started Leech Printing with one single printing press and since then, the business has evolved through four generations to where it is today, serving western Manitoba with high-quality printing, copying, display graphics, graphic design, web design, marketing support, and promotional products. 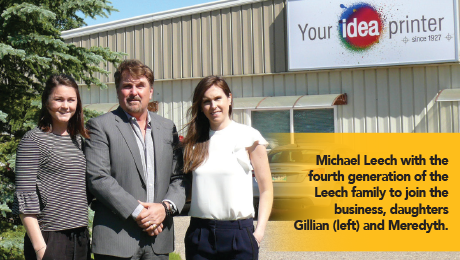